Nathanael Greene Academy is a school rich with history, traditional values, and a commitment to excellence by its parents and staff. It was named for General Nathanael Greene, a General under George Washington during the American Revolutionary War.

The school was organized during the summer of 1969 by a group of parents and interested citizens who sought a traditional college preparatory school which would also include prayer and religious education. Many of these original founders, their children and grandchildren, are still actively involved in the school.

On August 29, 1969, the school doors opened for students in grades 1-12. The kindergarten program was added during the 1970-1971 school year and K-3 and K-4 programs were added in subsequent years. Today, the school offers a comprehensive college preparatory curriculum for students beginning in K-3. The curriculum offers a well-rounded balance of academics, fine arts, and athletics.

The original 1929 “red brick” building, which was the Siloam High School, is still on the current school site. It was in this building that classes were held for students until 1969 when the Greene County Board of Education deeded the five and one- tenth acres and buildings to the Town of Siloam. On May 1, 1969 the Town of Siloam deeded the property to Nathanael Greene Academy and this remains the site of the school. 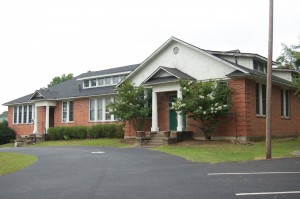 A restoration committee was established several years ago to renovate the original brick structure. This structure is a living piece of history with original tin ceilings, wooden floors, and tongue-and-groove wainscoating. There is a performing arts auditorium with grand acoustics and the restoration of this room is a priority. The building is now on the National Historic Register.

NGA Through the years